I admit. I’ve a slight phobia of Halloween.
Whenever I hear that the day is approaching, I pee a little in my (invisible) pants.
And the reason is totally man-made.
You see, on my very first Halloween, when I was a mere adorable, cuddly little nine month old puppy, my horrible stupid mummy thought it would be fun to dress me up.
So she went to the stores and grabbed me …
this.

Apparently, stupid mummy didn’t get the memo that Halloween is two months BEFORE Christmas.
So, yap, I ended up being Santa’s unwilling helper for Halloween.
#Mummyneedsacalendar

As if it wasn’t bad enough, it was actually a matching outfit to Mummy’s Santa-rina outfit.
Yap, I was stuck in a tacky matching outfit with my mother.
#ultimateloser #pleaseburnthesepictures
Oh, and did I mention that she actually brought me to the Halloween Parade in the Village. And I got scared shitless by the zombies in the subway and started barking at them. And there was this guy in a shower curtain stained in blood. And walking Facebook profiles.
Yap, the things you see in NYC.
#mytraumaticpuppyhood 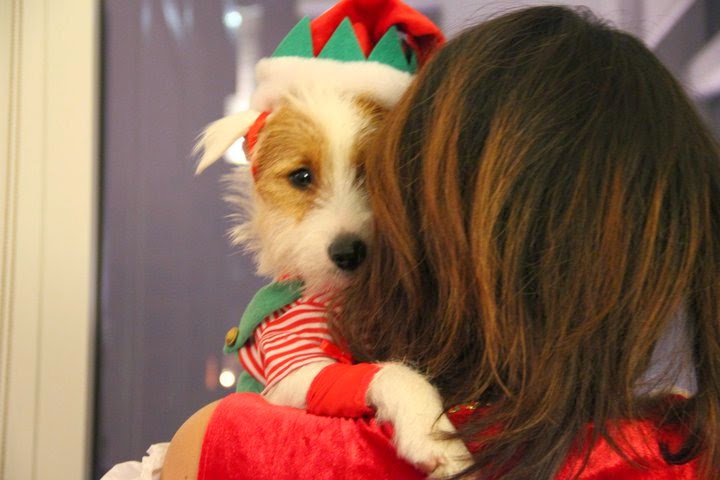 I did not like it at all.
Thankfully Halloween the following year got better. Well, just a tiny bit better.
For starters, Mummy didn’t want to squeeze in the crowd and join the parade again.
#HALLELUJAH
But, she still thought it was cute to dress me up nonetheless.
NOOOOOOOOOOO….
So I ended up…
in this. 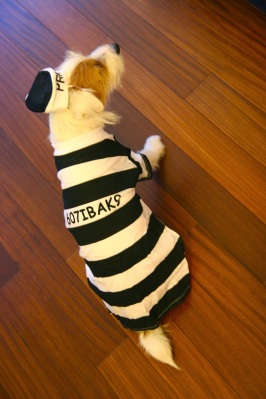 And she didn’t even have the decency to get me something that fits.
#Mummysucks
Thankfully, all I had to do was walk around the neighborhood looking like an idiot for maybe ten minutes before Mummy decided it was too cold to be outside.
Oh, and we lived near Times Square btw. So, you can pretty much picture the number of people that laughed at me.
#ihatemummy
I dreaded for months as the next Halloween creeped nearer.
But somehow, it was as if something in Mummy’s brain clicked. (Like finally)
She figured (wow~so clever -_-) that I hated costumes, so she started searching for a better option…
one that I don’t exactly have to wear.
And we ended up with Mr Pumpkin Man!
Unlike outfits that I have to wear, this fits just like a harness. Plus, it’s super lightweight and stays on no matter what I do.
#samapproved

I was so pleased that I even smiled in unison with Mr Pumpkin!

Maybe Halloween isn’t that bad after all.
Anyway, 2013 came and went. I was a little tip-toey during October and when nothing happened, I heaved a huge sigh of relief internally.
#peaceonearth
BUT… when Mummy announced that we were heading to a Doggie Halloween Party this year, my heart sank.
Not again?!?!?!?!?!?!?!?
The week prior to the party was shitty as I was constantly worrying about what I would end up wearing.
And when Mummy whipped out Mr Pumpkin Man, I never felt happier!
For once, I appreciated Mummy’s cheapo-ness for not buying me new outfits.
As for Pecan ah ma, of course it’s gonna be the lion mane that is collecting dust around the house.
With my outfit woes out of the window, I started getting pretty excited about a night of fun.
#nozombiesplease #nocrazymaninshowercurtainsplease 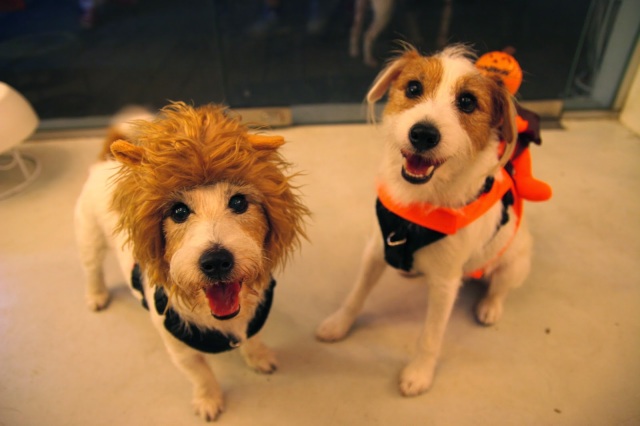 The party was organized by Pawlicious Bakery!
Kudos to their effort for decorating the space to make it feel more like Halloween!! 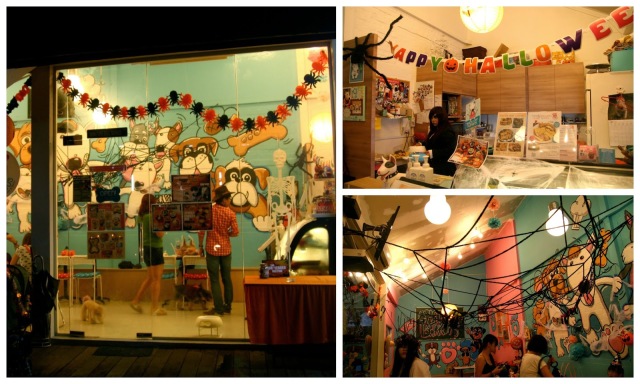 And the spread of human food was pretty impressive too!

But I wasn’t too envious, because the Four-legged section was equally awesome!

Plus, we were even given individual portions!
#impressed 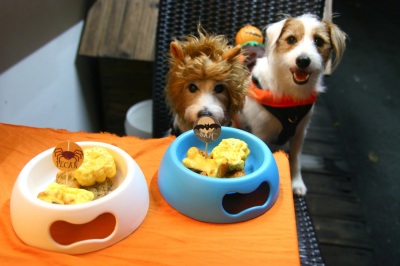 I was having so much fun running about, begging for food and barking at the gate (I was trying to convince my parents that we needed to swim).
So much so until I didn’t even mind when Mummy decided to put the mane on me.
Bring it on.
#Ilookhideous #fashionpolicewillkillmewhentheyseeme

As the mane was a little big for ah ma (it kept falling off when she shakes), she was given a Halloween neckpiece instead and she’s loving it!
We even got to keep it.
And something tells me that it’s gonna be reused next year.
#cheapomummy

Mr Pumpkin Man didn’t fail me once again. Even as I ran under tables (Mummy kept hearing his head knocking the chairs), he took it like a man and sat up high.
It was a great night! The dogs were relatively well-behaved. Pecan ah ma did great too. And my little tummy had a five-star buffet. (Hehe, I was table hopping for treats. Very successfully I must say)
When we left, we were even handed little goodie boxes!
So thoughtful can?!
#mytummysaysthanks
Pardon our stoned expressions… we were pretty exhausted after three whole hours of fun! 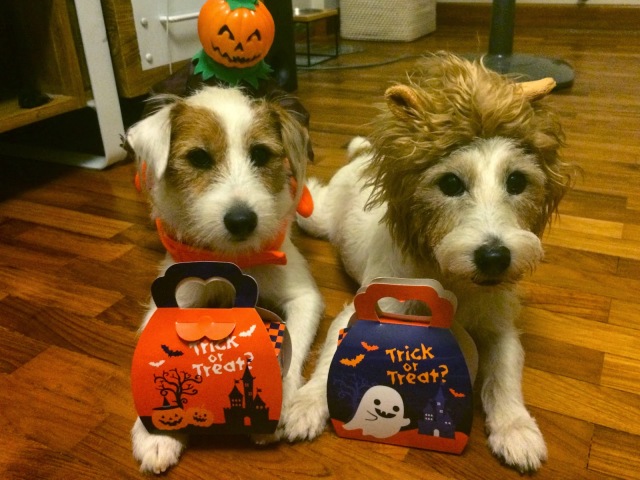 Unfortunately, as the event was at night, many of Mummy’s shots came out pretty bad.. so we didn’t have many to show.
#Mummyisalousyphotographer
However, we had so much fun that when we heard rumours about a possible Christmas party, we were super excited and couldn’t stop asking Mummy about it.
I’m just keeping my fingers crossed that Mummy has misplaced the hideous Santa’s helper outfit.
Else…..
Anyway, thank you Auntie Jaster and Uncle Burn for having us!
We had a blast!!!!!!!
There’s no better way to end of this post than with a scary picture of…
The Lioness Lao Ah Ma