For the first time in a very very blue moon, Mummy decided that she wanted to go for a hike with us. And of course, Daddy could not say no.
Hence, on a very bright Saturday morning, she woke up and dragged two sleepy dogs and one very sianz husband out of the house at 8.30am! (SHE NEVER WAKES UP BEFORE TEN ON SATURDAYS! THIS IS A MIRACLE)
Our destination was none other than Green Corridor! Mummy had heard great things about it from other dog owners and finally decided to explore the place for herself!
The Green Corridor used to be a railway land connecting Singapore and Malaysia. After the train stations were relocated, the railway line began defunct. While plans on what to do with the space is still underway, in the meantime, it has been converted into an awesome cycling and pedestrian path connecting many green spaces together!
For a start, we decided to challenge the Bukit Timah Train Station-Holland Road stretch of the Green Corridor. We got Grandmummy to drop us off at Holland Road and arranged for pick up at KAP in two hours time. The expected duration was an hour. But taking into consideration how much we loved to pee and mark every single spot we sniff, our parents decided to play it safe and overestimate.
It took Daddy just a few mintues to figure out the entry point onto the route! (We walked in via Ulu Pandan Road)
All geared up and ready to cheong (go forward).
Pecan ah ma acting like she is ready to sprint on and was all ready in her sprint start position.
Crazy dog.
As for me, I was all zen and calm.

As I was an awesome and very very good boy today, my parents decided to let me off-leash for a good part of the hike!
YEAH~~~~
The trail had tall bushes on both sides, hence, my parents weren’t the least worried that I would wander off track. In addition, they did have some really yummy treats!
And I did them proud by returning all but once when they called.
The one time I chose not to was when I started chasing and playing with another off-leashed dog who was wayyyy more entertaining than my boring parents.
Daddy had to chase after me and (lucky for him, but shitty for me) he stopped me just as I was about to slam myself into a muddy puddle just as the other dog did!
Boooo~
Well, at least Mummy had a good laugh! (So did a couple of passerbys)

Ah ma isn’t very dog-friendly (trust me, she’s a bitch to everyone else except me. HAHAHAH! Me and my charms.. sigh~). So, for safety reasons, she was kept on leash all the way. Nonetheless, she was really contented with that!

I took occasional breaks in between to appreciate the nature.
Fine..the truth was my stamina sucked~
To my defence, I did spend a good part of my time hopping for one shaded area to another. My parents and ah ma were so slow lor. They obviously couldn’t keep up.
Haiz~ So I guessed I did deserve all the little power breaks.

Of course, ah ma got some breaks too.
But her stamina was amazing! It was as if she could walk forever.
Scary~

After about 45 minutes, we finally reached Bukit Timah Train Station!
And we started looking out for the train!!! 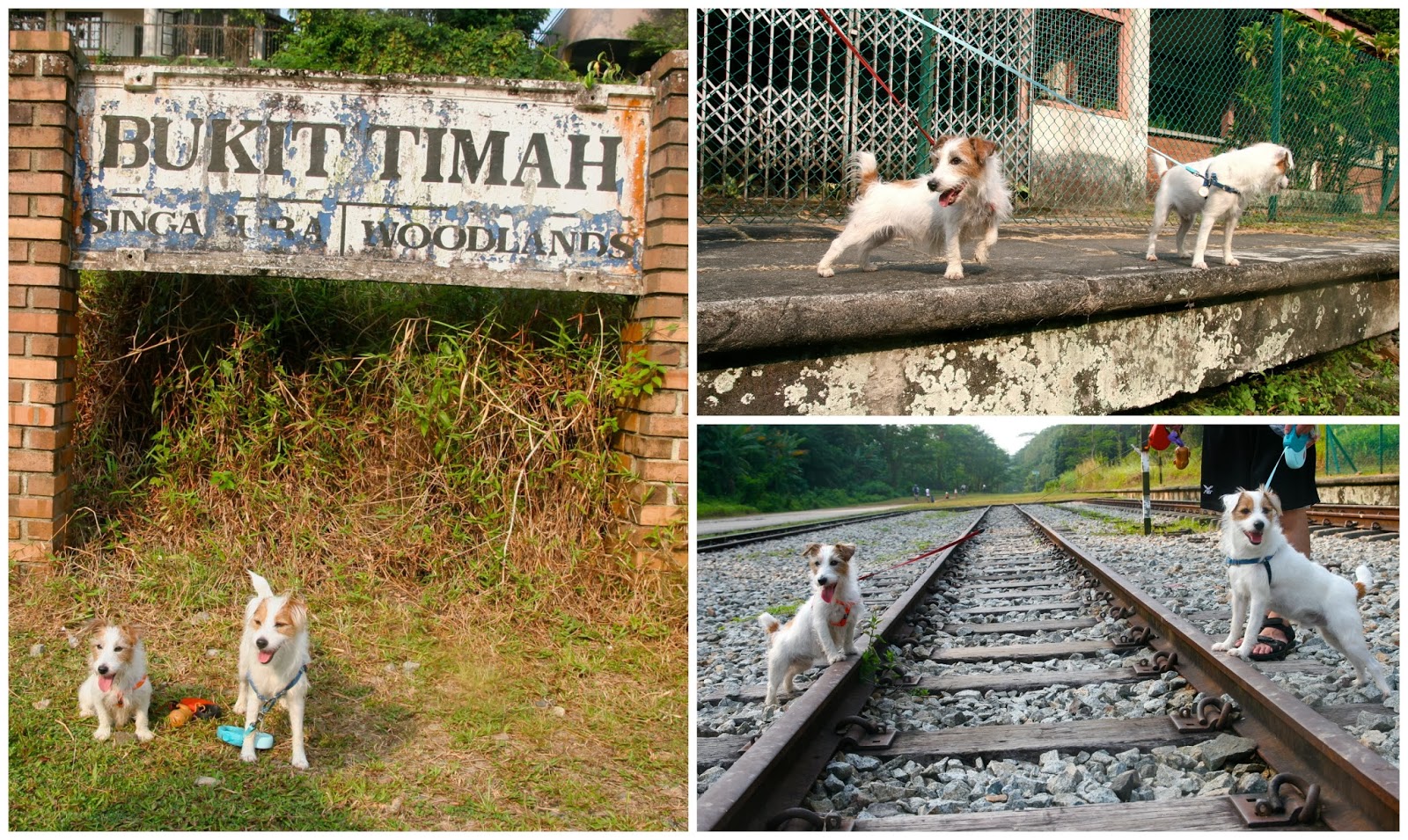 After a while, we were a little puzzled why there was still no train..
Daddy: It’s defunct by the way.
Sammy: Say what~ Chey, I just wasted my time looking out for nothing.
Pecan: Lalalallal~
Booooo~
Oh well, I’ll just plank on the tracks then.

Despite the disappointment (of not being able to hitch a train ride), we had some fun playing around the tracks!

We walked on and arrived at our destination fairly quickly!
(KAP is just to the left of the bridge.)
While Macdonalds breakfast was enticing, doing fun stuff was even better!
So, no surprises, but we decided to explore the bridge instead!

We checked out the passing traffic and peed on one too many spots.
Hehehe..

What a sense of satisfaction~

As we only took just slightly over an hour, my parents decided that we should walk more.
We ended up at Rail Mall an hour later, half-dead (my parents as well).
We definitely have to say that the hike was amazing! Although the weather was a little warmer than we would have liked, all the greenery, fresh air and off-leashed time won rave reviews from me, ah ma and even daddy!!
So, no surprises but we are foreseeing more morning hikes on weekends at the Green Corridor!!