Mummy chipped in with Auntie Charmaine (aka my mother-in-law) and bought us a…
PADDLE POOL!
It’s actually meant for kids but it works great for dogs too!
*Wriggly dance*
Auntie Charmaine had wanted to get one for her boys, Snowy the Golden Retriever and Jager the Alusky! So, Mummy, thinking that it was a brilliant idea, decided to share the cost. Plus, Auntie Charmaine has a lovely front garden that had ample space for the pool!
It certainly reminded me of the good old NYC dog park days where we got a lovely dog pool each summer to combat the heat! Hence, I was wayyy over the moon when Mummy told me what was happening!
Auntie C, ya the best!
Let’s get the party started!!
It took the adults about ten minutes to assemble it and probably another ten to fill the pool.

Pecan ah ma was the first to realise what was going on and certainly couldn’t hide her excitement. 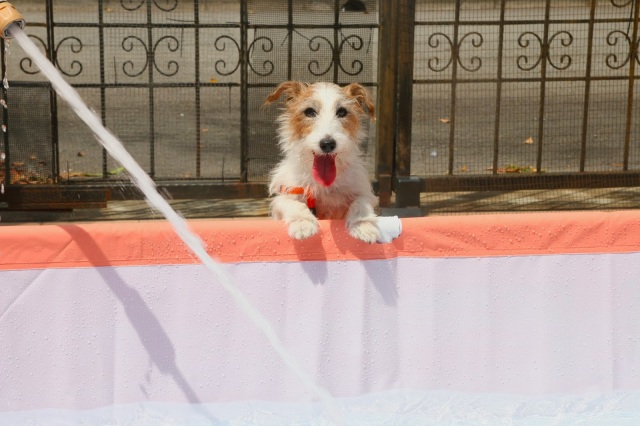 In fact, she was so excited about it then she happily hopped in even before the pool was filled.
Yap, so the bikini ah ma got the first dip.
Booooo~

Of course I couldn’t lose out and embarked on my rescue missions almost immediately!
Kudos to Mummy for bringing our toys!

Although Snowy might be the one few rare Goldies that hate to swim in deep waters, he seemed to really like just cooling down in the pool!

On the other hand, the love of my life, Jager, was quite a loser took a while.
I mean, to his defence, Aluskies (Huskies and Malamutes) ain’t really water dogs.
So he spent most of the time standing far away, staring in disbelief at our love for water.
In fact, he hated it so much that he actually hid in the house for a while.

But that’s nothing true love cannot resolve.
With some coaxing from me, he took his first step into the pool and never looked back.

He actually loved it so much that he kept coming in on his own, even without anyone’s prompting!
#thepoweroflove

Okay~ I exaggerate.
The truth was… he was lured in by his toy.
But hey, whatever works k.

While Jager could effortlessly stroll in to the pool (Snowy had to be carried in as he’s a sweet old man with weak limbs), it was a little high for me and the grumpy ah ma, Pecan.
But being the athletic dog I always am, I easily hopped in and out.
Mummy had to constantly give ah ma a hand to get in. 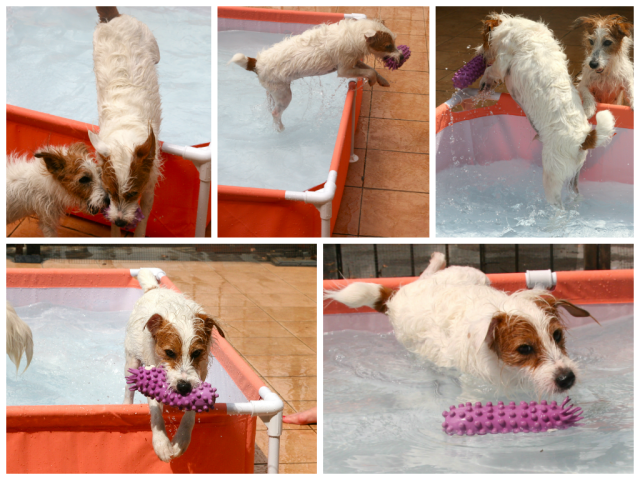 We pretty much spent our whole afternoon rescuing toys!
And boy did it feel good under the hot sun!
The adults were so envious that they nearly wanted to dip in with us, until they saw how the water turned from clear to murky.
Hehe, yap, Mummy didn’t bathe us for a good week prior to the pool party!
Tsk tsk tsk.

Of course, like kids, we had our moments of disagreements.
Snowy ah peh took up so much space, that when Mummy tossed my toy, it landed on his back!

After a little shuffling and compromise, it worked out great!

Deciding between rescuing the stingray and the elephant.
#lifedecisions 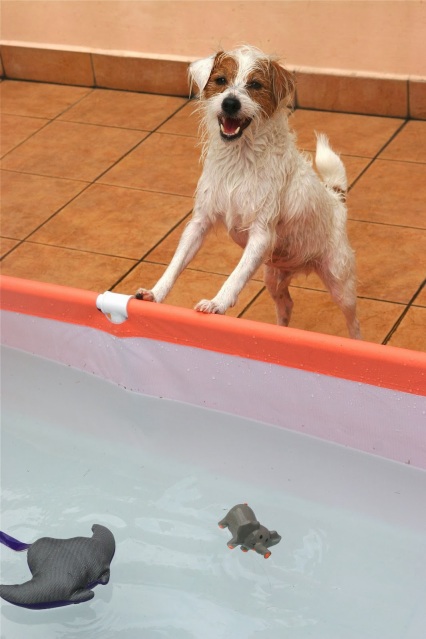 As usual, being Jack rascals, we were also barking our lungs out constantly, trying to convince the adults to do the rescue for us.
Sorry Auntie Charmaine! We sure hoped nobody complains about our lovely vocals!

The awesome party lasted a couple of hours and we were loving every second of it.
And as life always is, good things come to an end.
A shitty end, aka bath time.

After which, we were given tons of delicious treats!!
The adults also attempted to snap a good shot to commemorate our first pool party.
But unfortunately, failed.
(Snowy looked so pissed and ah ma refused to let go of the treat that was supposed to be the lure!)
LOL

Despite Jager being camera ready all the time, the adults gave up after numerous tries.
Haha, it sure is a challenge getting four pooches to cooperate! 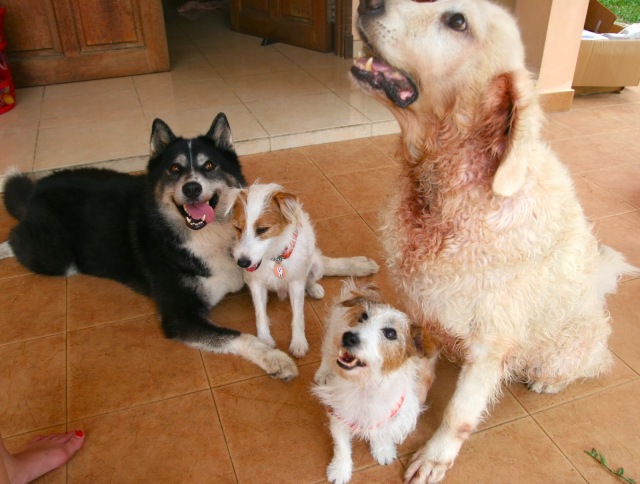 Nonetheless, we had a blast!!
And Mummy was pretty glad to see two happy sparkling clean dogs (oh, and dead tired too) after the party!

We are certainly looking forward to our next pool party!
Hopefully, it comes with a lovely BBQ dinner too!
THANK YOU MUMMY AND AUNTIE CHARMAINE!
Oh oh, and Auntie Lynne and Auntie JY for snapping some lovely shots and playing with us.
PS: Sorry for damaging your ear drums for the afternoon!