We had a little family outing to the East Coast of the little red dot!
As nice as the photos looked, it was a pretty circuitous journey getting there.
Well, you see, the intention for this outing was to attend a pets events at ECP. And since we are commuting from the northwest to the far east, mummy wanted to go cycling as well. We decided to fit mummy’s and daddy’s foldable bicycles plus Sam’s little bike seat into GrandDaddy’s sedan.
And boy, was it a challenge.
Firstly, bringing two foldable bikes, a bike seat and a not-so-obedient dog down the lift wasn’t exactly  a piece of cake. When we finally made it down, my parents spent a good twenty minutes trying to fit the bikes into both the back seats and the boot of the sedan. I swore I heard mummy heaved a sigh of relief when she realized that everything could fit afterall.
Secondly, we discovered that mummy’s bike got slightly damaged during the transportation from NYC and that tyres of both bikes were deflated. Hence, we had to make a detour to a bicycle repair shop.
There, we got everything fixed and even bought a bike rack to carry the bikes instead.
Believe it anot, it actually took us a whooping two hours before we finally arrived at ECP!
Hooray! I was all ready to get started.

Featuring my ride of the day – my buddy rider on Mummy’s bike.

We headed straight to the pets event, Fun Time by The Beach.
Mummy was pretty disappointed with what was available (I guess she has to stop using the events in NYC as comparison.) and we left pretty quickly.

Tippy-toeing away from the event. =P 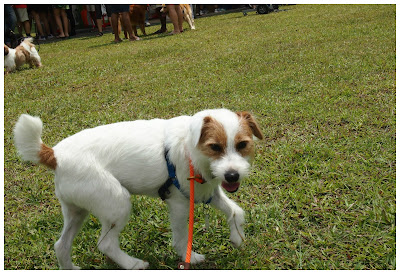 Luckily, mummy was too excited to start cycling that the disappointment didn’t affect her the least.
Little Sam all geared up on my little seat!

A quick photo with my parents before setting off for some wind chasing!

Although the park got pretty crowded, it was a really fun day out! I got to breathe in the many scents of the sea and on-going BBQs and indulged in people-watching (too many pretty girls!!). Though it was kinda irritating hearing mummy whining about how tired she was and scolding daddy to get him to slow down. -_- Lousy mummy~
Even though I was being chartered around, I was pretty tired and had to lie down when my parents stopped for a sugarcane juice break.

After a good hour or so of cycling, we decided to head back as we saw the dark clouds approaching. My parents found a nice little patch of grass near the car park and allowed me to run (on my retractable leash) around a little, exhausting me out totally.
No surprises, I was completely knocked out when I got back into the car.
Sigh~ what an awesome day~