Pecan ah ma has a new best friend.
And it isn’t me!
*Hengs man~*
#phew #NEVERFELTSORELIEVED
Can you imagine me having to engage in some granny talk with the grumpy old lady?!
(Like which veggie is the freshest, why are my boobs sagging.)
OMG.
*Shrugs* Thankfully, I am NOT her best friend.
Her new best friend… is actually..
DONUT!

Yap. It was the toy that Mummy bought ah ma to cheer her up during her recovery. While Mummy knew Pecan loves squeaky toys, she certainly wasn’t expecting ah ma’s obsession to her new Ferplast toy.
In fact, obsession is an understatement man.
Pecan ah ma is literally glued to Donut. And everywhere ah ma goes, Donut follows. 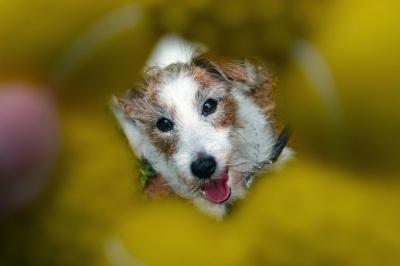 That includes our daily walks.

She just has to bring Donut EVERYWHERE!

Ah ma also refuses to let it go at all times during the walk.
Not even when she’s peeing!!!!
How can you pee with something in your mouth?!?!!?
#unbelievable 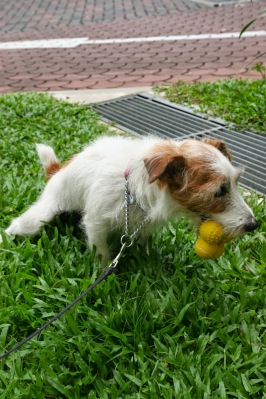 The truth is.. it’s a little paiseh (embarrassing) for me.
Since Ah ma started bringing Donut for walks, I realized that more and more people were staring at us and giggling while pointing at us.
#sopaisehcan
Of course, the crazy senile ah ma doesn’t give a hoot about the stares we were getting.

It’s like she’s kinda trying to achieve the “I bring my toy everywhere” kinda thing.
And she finally let it go just for Mummy to take a “I’m been here” shot. Once the shot is taken, she would dash follow and grab Donut immediately.
-_-
#pawpalm

Oh and if you think that she will let it go at home, you are SOOOO wrong.

She even brings Donut along to greet Mummy when Mummy comes back from the Supermarket.

Oh oh..and to join in the celebrations for her biopsy results.
(And it was at Grandmummy’s place by the way)

Like seriously~
To ensure that she drinks water, Mummy would take it away once in a while. And when Mummy does so, she would keep her eyes on it like a hawk. 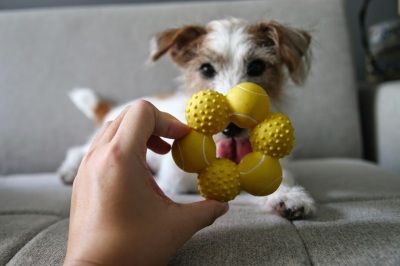 Mummy was starting to get a little worried with ah ma’s obsession. But thankfully, after a weekend of fussing over the silly yellow toy, ah ma finally took a break and released Donut from her jaws.
That being said, she just has to make sure that Donut doesn’t leave her side.

#siaozhabor #ahmaisobsessed #theyellowtoyisdamnsmelly
Oh well, at least she’s leaving me alone. Plus, when Mummy offers us a treat, Pecan has to take an extra second to put Donut down before heading for the biscuit. And you know what, that second makes a huge difference.
Hehehe… *pats my round tummy*