The reason behind my ever increasing waistline (sigh~) was the lack of control over the amount of treats I got while I was at my grandparents’.
“But..maaaa~”
That’s no such thing as too many treats!!!! Pity my stupid parents do not seem to agree.
As a result, Mummy decided to ration my daily meal portions and bring them over to the helper that watches me in the day.
She started by using zip-loc bags, which she quickly realised wasn’t exactly environment friendly (Time to cut down my carbon pawprints). She moved on to Daiso boxes which were pretty useful. However, she always had to bring the boxes in ugly plastic bags there. And being mud-brain Mummy, she would often forget to bring either the boxes or the bags back.
So, on one of her “I-need-to-hit-USD125-to-qualify-for-free-amazon-shipping” shopping sprees, she decided that I deserve a nice little lunch bag of my own.
Okay, considering the bag is half my height, it’s not that little.
Introducing my Skip Hop Zoo Lunchies Insulated Lunch Bag.
Of course it’s a design of a dog (though I’m cuter). 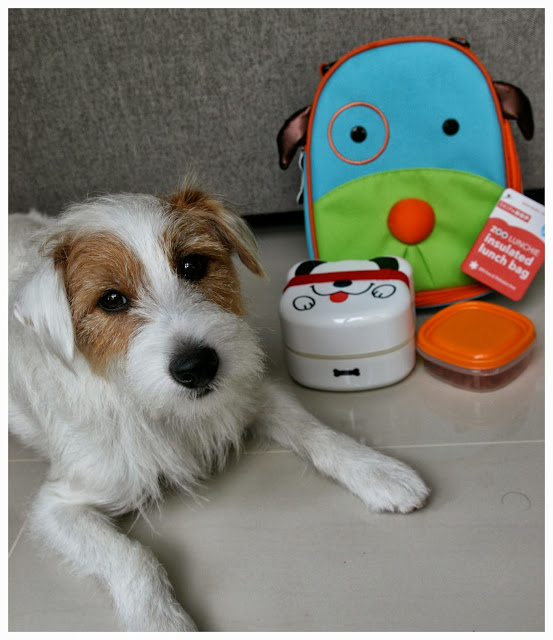 To up the cool factor, she decided on another of  totally useless, spendthrift purchase – an overpriced Kotobuki happy dog bento set!
The ‘it’ thing about this bento box is that it has three storage layers, out of which the middle layer can be kept separately. This is perfect for me to store my dinner (often in the form of frozen nuggets that required some thawing)!
Once mummy reaches grandmum’s place, she just had to remove the middle section and put it in the chiller. Viola~ The helper will remove it 30 minutes before my dinner to ‘warm’ it to room temperature before feeding me.
Easy huh?

In my little woof-woof-land, I was overjoyed when I saw the bento set! Lovely images of lip-smacking good made-with-love home-cooked food that will fill the equally cute bento box were floating in my little mind.
*Wags tail*

(source: Rachelsrandom.com)
Then, I opened my little eyes, and all I saw was this….

*Jaw drops in disappointment*
What a far cry…
#mylifesucks
Presenting my daily meals – a 1/2 cup of Merrick kibble, two lovely Primal nuggets (alternate between freeze dried and frozen, depending on Mummy’s laziness level) and my pathetic snacks stash of the day. Okay, [holds back tears] it isn’t as bad as it looks…
Nay, just kidding, it’s really quite good! Though a real bento lunch would be awesome.
Oh well~
Plus, the bottom doubles up as a bowl!

And they all fit nicely into the insulated lunch bag.

All set and ready to go! 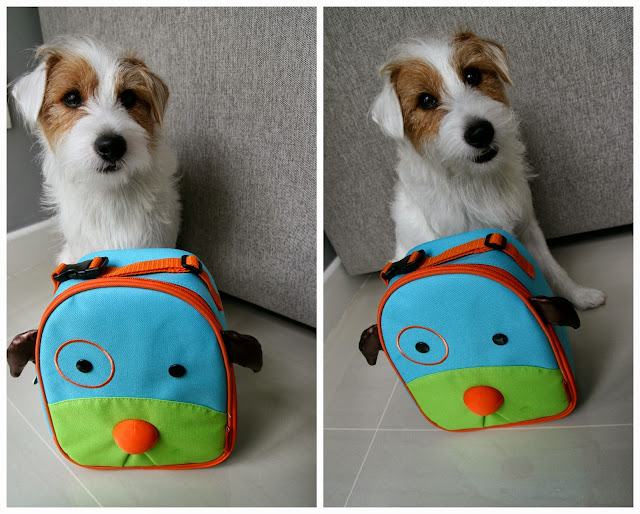 With this little lunch bag, we don’t have to worry that we will run out of boxes or have to take the non-green route of using zip-loc bags.