Rumor has it that I’m going for a haircut…

Noooooooo…..
Mummy always loved my shaggy and unkempt look.
In fact, my look was exactly what convinced mummy to step into the traps of owning a crazy Jack Russell terror. Yes, she is that shallow.
The truth is, how not to love? 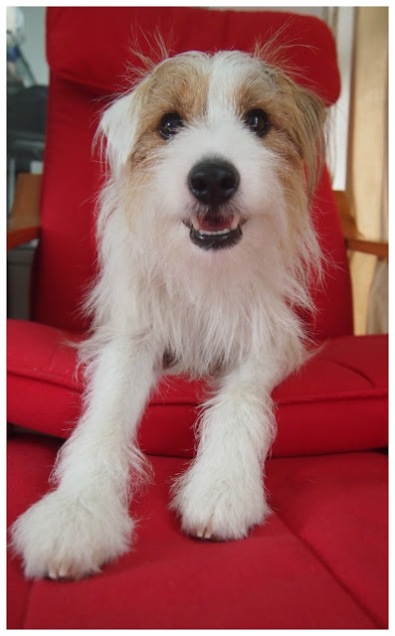 That being said, mummy did make the mistake of getting a groomer to shave my coat down in preparation for my first summer in NYC. When she came to pick me, she was convinced that she was given the wrong dog as I looked so different. She was a little heartbroken that she had ruined my cute shaggy look and I looked really unhappy too.
Lucky for us, my coat grew back gradually. (Phew~)
Well… I really ain’t too pleased to recall my ‘botak’ (hairless) days. Thank goodness it’s over.
-_-

Since then, besides getting my eyes hairs and hygiene areas (my cute butt and little weewee) trimmed by groomers, I had not gotten any other haircuts and I kinda liked it that way.
Until we moved to the little red dot…
Mummy was initially very resistant to getting me a haircut as my coat is generally weather resistant and should be good even in a climate like Singapore.
However, after endless nagging by Grandma (probably due to my endless shedding) and seeing how lethargic I was in dealing with the heat, she caved in and booked me an appointment with a groomer.
Honestly, the real tipping point was when she was walking me one day and a little boy who walked past with his mother pointed at me and said I looked like an old man because of my shagginess.
-_-“
Anyway, under Godmummy’s recommendation, mummy decided to visit Happy Pets Grooming Salon for my groom.
Coincidentally, the groomer is called Lulu, which also happens to be mummy’s nickname among her friends. Guess that gave mummy a cordial feeling and some assurance too.
Daddy and Mummy accompanied me there on my first visit.

Here’s some BEFORE shots. 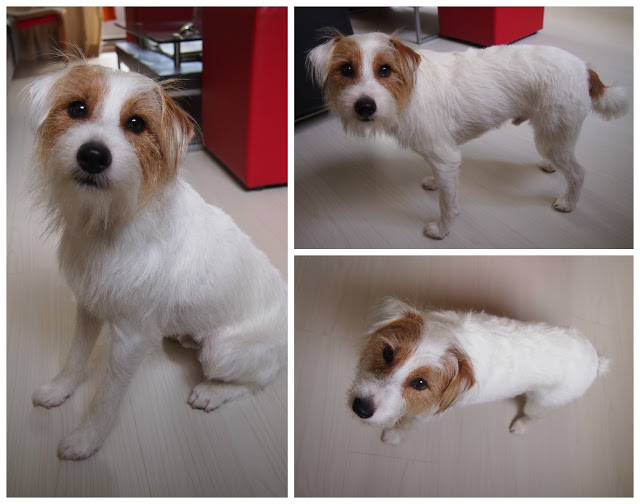 Mummy learnt her lesson and asked for my coat to be lightly trimmed as opposed to shave so as to prevent me from getting sunburnt and looking like crap again. She also requested that my ‘mane’ be kept, so that I would still look suave. What a vast difference it made! I certainly looked neater and younger (Bring it on little boy.. whereever you are… grrrr)…
Besides, Auntie Lulu was really patient with me and despite my initial whining and struggles (when mummy first left), I took to her quickly and became a good little dog (kinda). Well, the treats did help too… shhhh… The groom is really affordable and she even offers pick-up and drop-off services. Awesome isn’t it?
How do I look? Not bad?

I wasn’t very convinced initially.
So, mummy engaged me in a game of fetch.
And boy, did it feel different! I was able to run faster (with less baggage) and I really didn’t feel as warm as I used to.
Yap, now I’m way happy!

In addition, everyone I met, after my haircut, was full of praise of how good I looked!
Hee, maybe getting a haircut isn’t too bad afterall.
To save some $$ while ensuring that I stay cool, I’ll be getting a haircut once every two months.
Kinda looking forward to my next groom!

Hi my little Sam, has it already been a year without you? Why does the pain still feel so real?
And just like that, Jackie spent her first year with us.
When I had Sam, we briefly ventured into the world of agility. Sam had so much drive and speed and he absolutely loved the treat rewards from conquering the obstacles. But our busy schedule (and the many new additions) got the most of us and we didn’t pursue it further. How I wished I did more with the fat boy as I know he would have been amazing.
It’s been a while since we have these many Jacks hanging out at the Loo Lim Household. My heart is so full. And, this is truly my breed ❤️
Time for some Jackie Bean update!
And just like that, this little guy turns five today.
%d bloggers like this: