Mummy and I (with a little reluctant help from daddy) completed our first art project using this..
my little paw. 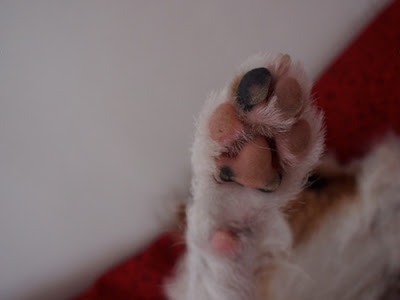 We got the inspiration from one of mummy’s favorite blogs, Pretty Fluffy. Since mummy happened to have the awesome martha stewart craft paints, we decided to give it a shot.

Unfortunately for me, the process wasn’t very enjoyable. I didn’t enjoy having paint on my paws and was struggling to get away. Poor mummy had to get daddy’s help to hold me still. Mummy initially wanted to explore various color combinations, but since I was such an uncooperative partner, she settled for the first color she tried – orange. (That also explains the lack of photos of the process.)
A quick shot of me being pissy after the whole process. Blah~

Mummy found a temporary frame and put it in. While the process sucked a little, the end product was pretty awesome.
(Plus tons of treats and tummy rubs were a great bonus.) 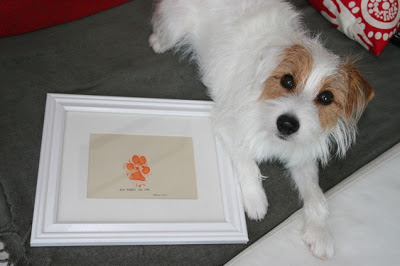 Mummy got me to pose again, later that night.

Hee, a cheap and quick project with such a personalized end product.
I’m willing to give it a second try, maybe.