When Mummy first adopted Pecan, this crazy feisty ah ma’s energy was higher than mine. She even did better than me on her health checkup and blood test. (I failed my blood test twice due to high protein levels, aka eat too much.) For a while, Mummy thought that she adopted a ten-month-old rascal and not a decade old granny. Seeing how healthy and hyper ah ma is, I was quite resigned that I will be stuck with her for a long long time. (NOoooooooo) The only problem was that she was not sterilized. After taking ah ma’s age into consideration (plus, I’m neutered), Mummy decided to let it be and not let ah ma undergo the surgery for that.
Little did she know that this will come back to haunt her.
*Den den den den* (Movie dramatic entrance)
Basically, Mummy noticed that ah ma’s vulva was exceptionally swollen. While she thought that ah ma was in heat when we first got her, it remained swollen even after six months. Sensing that something was not right, she brought ah ma back to our favorite vet – Dr Vanessa. Dr Vanessa suspected that ah ma’s uterus might be infected and recommended that ah ma get spayed as soon as possible. During the consultation, I also asked Dr Vanessa if ah ma will be less grumpy after being spayed. Dr Vanessa laughed and said no.
WHY NO?!?!?!?!??!?!
#resigned
Anyway, Mummy decided to seek Dr Vanessa’s opinion and let ah ma go ahead with the op.
To be honest, Mummy was dreading the day as she was worried that ah ma might not make it.
The good news: she did.
The not-so-good news:  she had pyometra. On top of that, she had a few tumors in her womb (the biggest was 5cm)!
That’s bigger than my nose!!!!
Dr Vanessa has since sent the tumors for biopsy and it will be a week before we know if they are cancerous.
#prayforahma
More importantly, Mummy was just glad that ah ma is still alive!

But it was really obvious poor ah ma was in a lot of pain as she spent the whole night shaking. She was so uncomfortable that she did not even bother growling at the two other dogs that were in the clinic with her! That’s a first!
And despite not having anything to eat for the last 24 hours, she refused all the food, including her favorite wet food that Mummy gave her.
Hehehe, no prizes for guessing who had to finish the leftovers.
*pats my round little tummy*
Seeing how much ah ma is suffering, being the great little bro I always am, I gave up the best sleeping spot in the house (aka our parents’ bed) for her.

So Pecan got to cuddle up with Daddy and Mummy and that certainly perked her up a little bit.
Although she was still shivering a fair bit, she did cheer up a little.

Recovery Day 2
Ah ma is seriously a fighter.
Not only was she shaking a lot less, her appetite was pretty much back and she was back to gobbling down her food. That being said, her tail was pretty much down most of the day and she was walking like a slow coach on our walks.
Needless to say, I gave up my sleeping spot one more time. 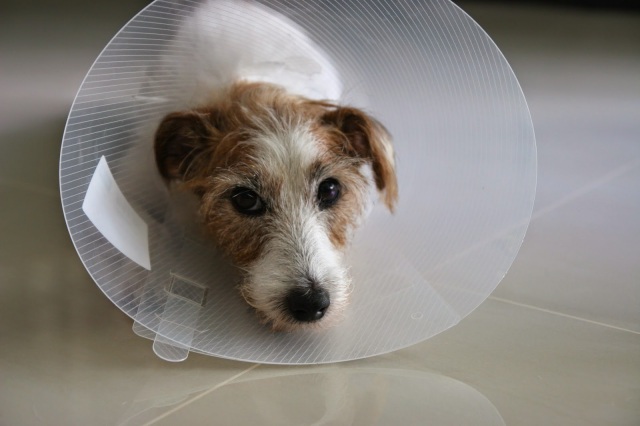 Recovery Day 3
When Mummy woke up to this face, she knew that ah ma is back!!!
(Yap, I can confirm that as she growled at me when I attempted to steal her treat.) 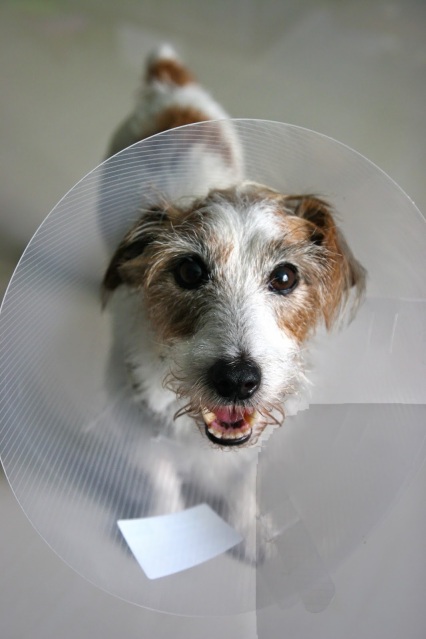 Pecan’s tail was also back to the endless wagging!
And we got back to our routine of sleeping on clean laundry! 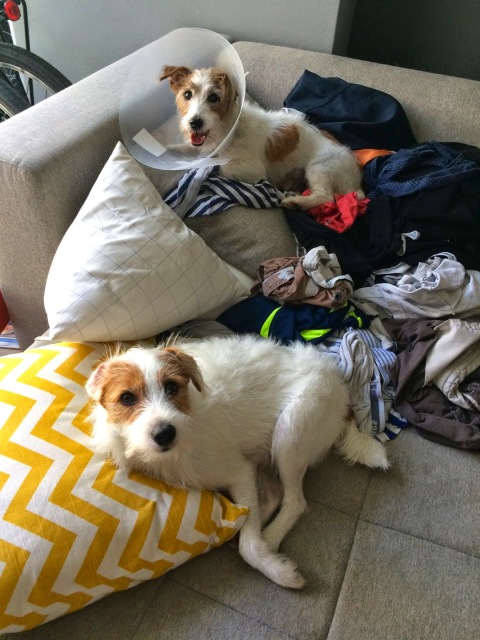 Not forgetting our massage routine too! 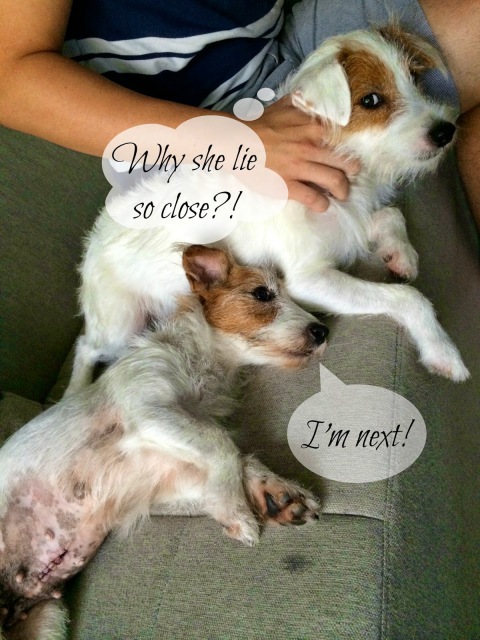 Recovery Day 4
Yap, ah ma was as good as new!
Sigh~  my tragic life is also back.
She wasn’t shaking at all and went back to hopping around, walking like the speed of a bullet train and of course, stealing my food. =/
Feeling bad that ah ma had to go through all these and to make ah ma happy, Mummy even bought her a little toy to celebrate her recovery. 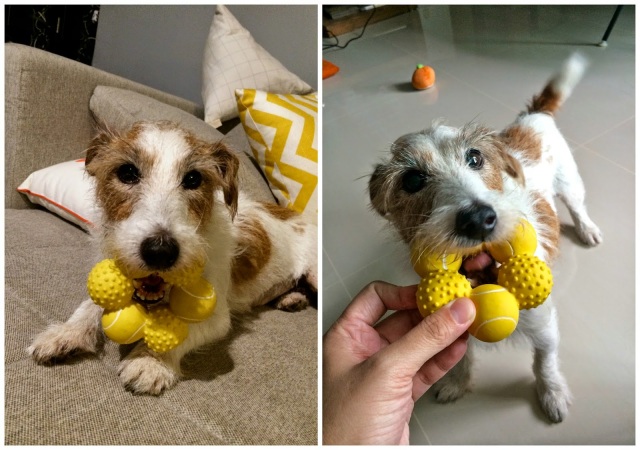 Ah ma is clearly amazing as in just four short days, she is back to her usual self! If not for the cone and stitches, I doubt anyone will know that she even went through an op!
On a good note, at least now her AVA registration fee is cheaper!
We’re just waiting for ah ma’s biopsy result and fingers crossed that she will be okay!
Meanwhile, I’m back to being tormented by her.
SIGH~
Oh, well, at least I got my spot in the bed BACK.
WAHAHHAHAHAHAHA