Mummy is a huge fan of Burt’s Bees Beeswax Lip Balm as it miraculously kept her lips from cracking throughout the three years in NYC. (More importantly, it’s dirt cheap in CVS!)
So, it came as no surprise that the moment my shopaholic insane  lovely Mummy realised that Burt’s Bees has developed their very own pets line, the Burt’s Bees Natural Pet Care, she just had to get her hands on them.
Unfortunately, Burt’s Bees pets does not ship internationally. Even more tragic was that while Amazon does carry the items, they do not qualify for free shipping. So she spent the next few months whining and wondering who can she bother to help her bring the items back. Anyway, after months of ‘drooling’ over the products, Mummy decided to finally take the plunge and just pay for overpriced shipping (aka Vpost).
Yet another blow was that the items were sold by two different suppliers! (Well, fyi, Vpost charges by volumetric weight. Having two different boxes means that she will end up paying to ship some USA air as there will be a fair amount of empty space in each box. Too bad…) Of course, she went ahead anyway.
Though shipping costs almost as much as the products themselves, at least the items came undamaged!
Presenting the useless shit Mummy buys my very own Burt’s Bees pets collection! 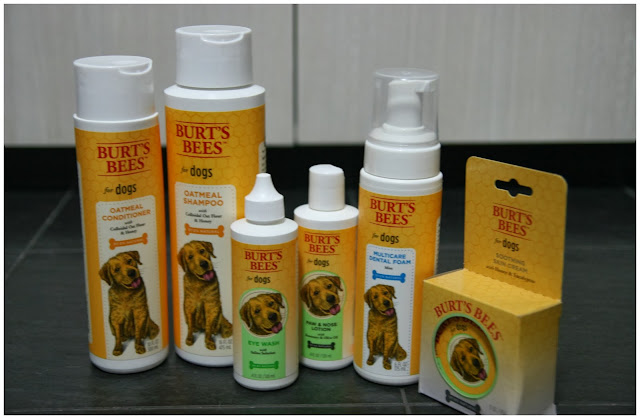 I was pretty excited as they smelt interesting.
Hm, will they be yummy too?
*wags tail*

Sam: Mummy, can I eat them???
Mummy: No, you dumb ass. They are for keeping you clean and smelling good!
Sam: …
WTF
Like damn sian can.
After spending all the money and effort, NOTHING there is edible?!
#mylifesucks
Posing with one of my major enemies – toiletries.
Burt’s Bee sells shampoos and conditioners that are specific to certain skin conditions. Since I’ve a really healthy coat (just a tiny bit messy and I blame Mummy) and am allergy-free, Mummy settled for the Oatmeal Shampoo and conditioner.

The shampoo and conditioner have now taken the queue number 3 and 4. Yes, it means that I’ve 2 other unopened shampoos that are collecting dust in the cupboard.
*Nods* My mom is a hoarder.
I’ve a history of cracked paws a while ago cos my stupid Mummy thought it was a great idea to wash my paws thoroughly after each outing. As a result, my cute little feet started becoming too dry. Though she has since stopped the practice and settled for wet wipes instead, she does take extra caution to prevent that from happening again. Hence, she just couldn’t resist buying the Soothing Skin Cream as it can act as a paw moisturizer as well.
Pity that it’s a bit too liquid. Thus, Mummy decided to apply it on before we go on our next walk as she didn’t want little oily paw prints on her floor tiles.

I’ve a balding nose line.
See the pinkish spot above my nose? As cute as it is, it’s actually a bald patch.
Sigh~
#grownmanproblems

One of the items Mummy also included was the Paw & Nose Lotion, in hopes that it will help me grow some hair on that spot.

After applying some lotion!
Keeping my paws crossed that some hair will grow back.
If not, as least that bald patch stays moisturized.

While I’ve pretty good dental hygiene,
(I brush my teeth every night and even floss with a dental stick. *Beams proudly*)
Mummy thought it would be fun to try out the Multicare Dental Foam.

I admit that I ain’t exactly fond of the taste, but it’s quite fun to lick the foam off my teeth!
Hopefully this will make my teeth pearly white!

There were several other items that Mummy was pretty keen on too. However, she wasn’t sure if she wanted to risk them being confiscated at customs (Customs permit the import of sprays). Also, many items are created to tackle problems I don’t have (e.g. Spray for Hot spots). So it would be a real waste of money to purchase those.
At least she’s sensible for once. Phew~
We are not too sure how good these products are at this point of time. Plus, we weren’t expecting any immediate effects. Well, hopefully they are as good as Mummy’s lip balms!
Meanwhile, I’m just hoping the next shipment (if any) that arrives will at least contain something I can eat.