This is the dog version of the local tea-time snack Ondeh Ondeh! Actually, Mummy saw the recipe off Pretty Fluffy and felt that it reminded her too much of one of her favourite treats. Hence she decided to make it for me. Plus, the ingredients were pretty similar to that of the Anzac, so mummy didn’t have to buy any new stuff!
(Well, she did replace the coconut oil with the Olisana we already had and used desiccated coconut flakes instead of fresh finely shedded coconut.)

As we didn’t have a food processor, mummy decided to use the food blender, with a pretty underwhelming outcome sadly.
It was difficult to blend/mix the oats and as a result, only those at the bottom were well combined. (Time to invest in a food processor!) With the limited successful mixture, she was only able to make SEVEN coconut treats!
So precious!

Posing with my best smile! Hoping to be able to eat them quicker!

As usual, she just had to make me wait.
Boo.

I finally flashed out my million dollar smile…

and it worked!
I got to eat… 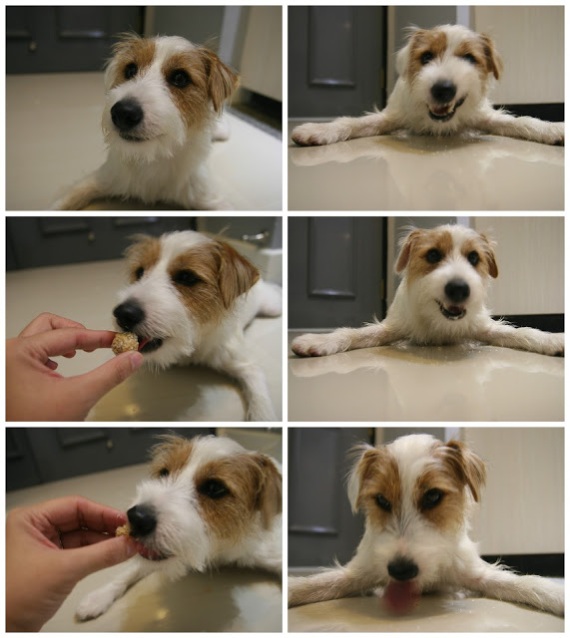 ALL SEVEN OF THEM!
Hee, as mummy didn’t want them to spoil, she decided to just give all of them to me.
What a great after dinner snacks.
So this is what desserts are like.
Me want more!!
Mummy’s Note: I conveniently skipped the refrigerating stage (no thanks to lousy speed reading) but it seemed that Sam couldn’t care less. He was probably happy that he got to eat them earlier. As usual, I did try it and it was pretty good! Guess the peanut butter added the much needed tinge of sweetness and that pretty much sold me on it. If only it had the liquid centre that bursts in your mouth, just like the original ondeh ondeh. But oh well, I shan’t push my luck (maybe one fine day when my cooking XP is high enough) and I’m sure the silly little dog likes it no matter what.