The last leg of our west coast vacation was at Las Vegas as Daddy had to attend a work convention there.
Vegas? Me no like.
Firstly, Vegas wasn’t as dog friendly as California was – no dog park along the strip, not welcomed indoors, no grass for me to run on!
Secondly, I’m underage. No booze, no gambling. BOO.
Thirdly, the weather was insanely warm! My poor little paws were burning, no thanks to the heat!
Sigh.
Due to the crazy heat, my parents decided to walk along the strip around 8pm, kinda thinking that as the sun sets, the weather would improve. Sadly, it didn’t exactly help as we were all still melting from the heat. 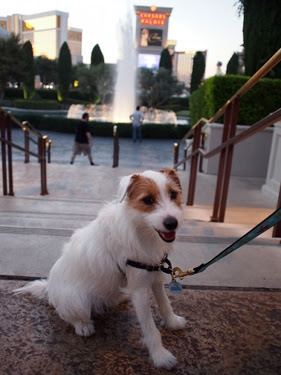 Anyway, we managed to stop by Bellagio just in time to catch the water show. 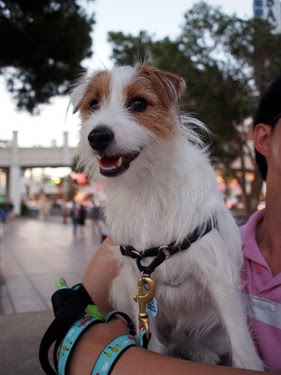 It was pretty spectacular, but I wasn’t exactly fond of the loud blasting sound.

After enjoying the show, we walked along the strip and found a wishing fountain that resembled the Trevi Fountain in Rome. I tossed a little coin in, wishing for good health, better weather and a little girlfriend. (*Please come true~) 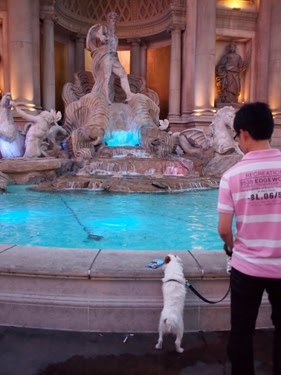 After what seemed like eternity, I finally saw a lovely patch of turf grass in the dessert! Pity it was fenced up. -_-
So unfriendly.

We made it to the Pirate Show @ Treasure Island. Mummy had fond memories of it when she visited vegas some twenty years ago. Unfortunately for mummy, her memory failed her and the act was just way cheesy and boring. She got so bored that she decided to take lousy artistic photos of me instead. Unable to withstand the lame-ness of the show, we left even before it ended. Besides, it was way overcrowded, stuffy and just crazy hot. By then, we got so exhausted battling the heat that we decided to head back. I was more than glad to do so. *Pants* 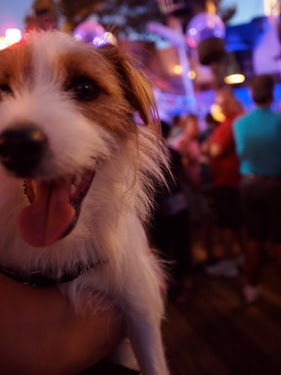 Our initial plan was to stay and walk around Vegas for 3 days, hence Daddy went ahead and returned the faithful car that had served us well for the past week.  However, after our failed attempt to conquer the strip on the first night, mummy decided that vegas just wasn’t the place for me to walk around and went ahead to rent another car just to drive me to a daycare for the next day. (Phew~ thanks mummy for not putting me through the heat again!) So I happily went to a lovely AIR-CONDITIONED daycare @ La Jolla on Day 2! Crazy Mummy decided to fight the heat and challenged the walk along the strip again. (It was so hot that mummy actually finished 4 bottles of water in barely under an hour!)
Anyway, mummy came along a Paul Frank store @ Fashion Show Mall. The below caught her eye and she couldn’t resist going in.

Of course, mummy did NOT leave empty handed and bought me some lovely gifts!

A signature skurvy retractable leash and a dog tag.

Shhh.. don’t tell mummy, but I was just shopping online and found that she overpaid for both items! Online shopping was almost 40% cheaper. Poor Mummy.
Anyway, vegas was a disappointment for me. (Think Mummy felt the same.) We were so ready to get out of there that we even changed our return flight to an earlier flight and left the hot hot HOT place 8 hours earlier. Sure was awesome being back in NYC!
I was a little sad when the vacation came to an end. Afterall, I really enjoyed how dog friendly west coast was, the gorgeous weather (except Vegas) and just exploring new hotel rooms and places. Hee, my mood perked up when Mummy told me that we will going to San Jose in end July to attend her cousin’s wedding!
Yapz, WE are going! *Wriggly dance*
Maybe I needn’t unpack my little doggy luggage then.