Okay, Jack Russells weren’t exactly bred for swimming, but since most dogs are born natural swimmers, Mummy decided to get me started on swimming. (Might have been the olympic fever~) While we had been to the beach several times, I wasn’t exactly interested in swimming, more in chasing the waves and getting my paws (only) wet. Thus, I wasn’t that thrilled when I heard about mummy’s plans, but well, I’m always up for a challenge! So, bring it on~
Mummy found an indoor swimming pool just for dogs. The place is called Water4Dogs and provides social/open swims (for up to 6 dogs), rehabilitation sessions, exercise sessions and even fun sessions (private for just 1 dog). In addition, unlike human swimming pools where the water is treated with chlorine, the pool is treated with UV to kill the germs, making it safer for the dogs.
We started off with a single exercise session with a therapist to evaluate if I’m suitable for swimming. (I have a luxating patella, but a real mild case.) After an exhausting 30 minutes, I was given the all clear and mummy happily signed me up for a social swim.
The social swim was really fun, except that the other dogs were much bigger than I was. My water confidence wasn’t quite there (and I was a tad bit embarrassed that I was the only one that needed a life jacket) and I would rather run around the pool than get in the water with the dogs. When I was forced in (no thanks to my stupid parents), the bigger dogs would splash in all around me and that sure wasn’t fun. -_- Daddy and Mummy weren’t exactly having fun either as the pool got pretty crowded with so many dogs and their owners. Nonetheless, I had a blast and was dead tired at the end of the session.
After the session, Water4Dogs suggested that we give a private fun swim a try and see if that would be a better suit for me. This time, mummy decided to bring her camera along to capture some shots.
My water confidence still isn’t at 100% and to be safe, my parents still fitted me with a life jacket. While  most dogs would simply just dive into the water, I am a little more hesitant and would take a ton of coaxing before I would step in. (Or my parents would just pull me in~)
Daddy’s coaxing me with a kong toy.
(Check out Daddy’s ugly tan line. haa~)

After testing his patience, I finally decided to take a leap~ 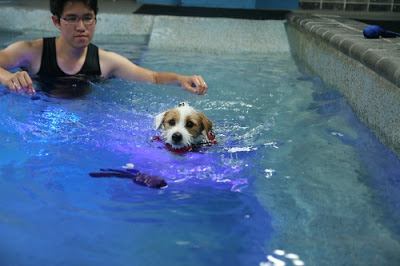 Once I got the toy, my instincts were to swim towards mummy!

Thanks to Daddy’s redirecting, I was able to swim towards ‘shore’. 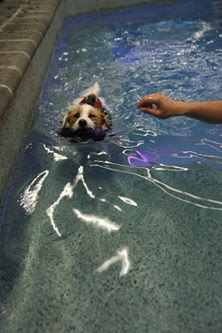 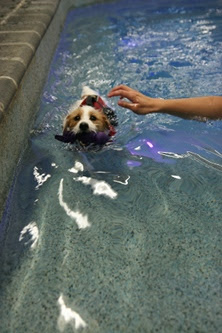 Hee, after taking these photos, mummy decided to put the camera away and joined us in the water for some fun. Besides playing with the toy, I swam to and fro my parents. As I was panting like crazy, my parents gave me short breaks in between to let me catch my little breaths. At the end of the 30 minutes, I could barely move and literally sat down once we stepped out of the room. (That’s my way of hinting to my parents to pick me up.)
In comparison, my parents and I were way more comfortable in the private swim as we had more space and need not fear that I get run over by bigger dogs. Hee, and guess what, they signed up for a 10 sessions package on the spot. That means that I’ll be swimming a hell lot more.
HOORAY~
Maybe I’ll become the Michael Phelps of the dog world in time to come.
Grrrrr~

Out of all my dogs, this dog is probably the hardest for me to photograph. I just can’t seem to get any shots of her that I’m pleased with. Maybe it’s because I don’t really know her, or maybe cos she is just in her own world most of the time.
After losing Sam, I started searching high and low for a piece of jewelry to keep a little part of him with me everywhere I go. But despite combing through a gazillion websites, nothing caught my eye. The many keepsake memorial jewelries either included diamonds (expensive and completely not my style) or capsule/lockets that were underwhelming.
Shake Shack always have a special meaning to Mumsy, Dada and Sam. The Shake Shack @ Madison Square Park was one of their favorite pet friendly hangouts in NYC. Regardless if it was a lovely summer day or a miserable ass freezing winter day, Mumsy would never fail to order a “Pooch-Ini” ice cream treat for Sam. And the greedy ass would lick it all up, even if he was cold and shaking. The world was perfect then. Just the three of them.
Flying jacks. Or clowns 😒
And Shelly is… SIX!
Bringing a bit of Japan to Kymmie the Shiba Inu, with @ohpopdog Nihon collection apparels.
%d bloggers like this: